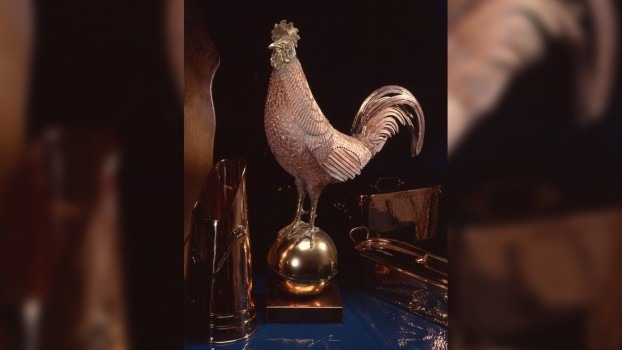 Once upon a time

Descendant of an old noble family of Vendée, ruined by the French revolution, Eugene de Hillerin took his family name into the world of hardware and trading in Paris. Visionary with a strong character, this great worker laid the first foundations of the brand in the district of Halles where he lived and where he knew everyone.

In the 1880s, Eugène de Hillerin acquired a hardware and household goods store and a boilermaker's workshop, located at 1, rue Montmartre and 7, rue du Bouloi respectively. His clients included restaurateurs who came to the Halles neighbourhood for supplies of fresh produce. Eugene soon had the means to buy a whole set of small businesses complementary to his activity including a tinning workshop, but also an old shop opened in 1820. This latest acquisition allowed the Dehillerin brand to anchor itself in almost 200 years of history... A few years later, all manufacturing activities were centred in the 15th arrondissement.

In 1890, the hardware store moved to rue Coquillière and adopted the facade that it still presents today, with its abundance of heterogeneous utensils.

Specialist in the supply and sale of kitchen equipment, the brand's motto is "Modest assistance in the promotion of French cuisine".

In fact, all professionals of the food industry, restaurateurs, pastry chefs, pork butchers and caterers have come to find the quality utensils essential to their art there. At Dehillerin, they are even happy to supply them in all manner of sizes.

Thanks to the quality of its products, almost every year the brand won awards in competitions organised around culinary exhibitions. In 1894, it received the gold medal for its cookware and the diploma of honour from 1895 to 1900.

At the end of the nineteenth century, Eugene was even asked to be part of the panel outside competition.

Prosperous and with an excellent reputation, the house of E. DEHILLERIN suffered a terrible blow in 1902 with the premature death of its founder, Eugene. Without the great energy of Augustine, his widow, helped by son Paul-Eugène, known as Maurice, eldest daughter, Andrée, and son-in-law, the Dehillerin saga would have been at an end. With an iron fist, Augustine ensured the durability of the company and took over the business until the return of Maurice from the Great War, demobilised in July 1919.

While Augustine succeeded in ensuring the transition between father and son, it is the latter who, with his daring and business sense, oversaw the growth in reputation of the company and developed it in a spectacular manner.

Early on, the house of E. DEHILLERIN became more than just a kitchenware shop. In 1909, the publication Paris, city of light which presents the tourism flagships of the capital, nominated it as one of the Parisian curiosities.

Its fame and reputation very quickly spread outside its borders. In 1912, the famous White Star Line, owner of the Titanic, ordered a certain number of utensils. In the mid-90s, excavations carried out on the wreckage of the liner also made it possible to reconstruct a Dehillerin bain-marie! This piece was exhibited at the Cité de la Mer in Cherbourg in 2015 during the temporary exhibition titled Objects from the Titanic talk to us.

At the beginning of the 30's, the brand also supplied the cold rooms for another legendary liner, the Normandy.

The Élysée and many Parisian palaces, including the Lapérouse hotel, also became Dehillerin clients.

The house was growing

True ambassador of the culinary art, Maurice Dehillerin rubbed shoulders with the greatest chefs of the time, participated in the dinners organised by Auguste Escoffier, and his clients included a section of the elite. As a man also in the field, he worked closely with his teams at the factory, where he created and supervised the various activities while watching over the store. He enlarged the factory built by his father in the 15th arrondissement by developing tinning and boilermaking workshops, and by creating a carpentry workshop.

This is where cookware, the famous copper and tin baking pans, and refrigerators - appetizer furniture, pantry coolers, hors-d’œuvre furniture - were made for restaurants.... A hundred employees were divided between the store and the workshops in a multitude of trades that have since disappeared. Tinsmiths, scourers, scrapers and other tradesmen made the walls of the factory reverberate until the 1960s.

The Second World War brought many dramas. Rich in a stock of raw materials and finished products sought by the Germans, the house of Dehillerin was very much coveted. It was destabilised greatly when Maurice was arrested by the Gestapo for acts of resistance after being denounced. Deported to Buchenwald-Dora, he died there in March 1944. He cast a long shadow that hovered over the house of which he was truly the soul and the kingpin.

In 1949, his son Maurice-Claude, known as Jean, entered the family business, then headed by his aunt Andrée and his cousins, Jacques and Raymond. When Jacques retired, he took the reins of the company and held them until 1996.

Sign of a bygone era, the owners of the house of Dehillerin were still addressed by their first name preceded by a respectful Madam or Monsieur. It was by the names of Madame Pierre alias Andrée, Monsieur Jacques and Monsieur Jean that they were thus known to the employees, customers and other merchants of the district.

After the war, while the activity slowly recommenced, the reputation of the house of Dehillerin made its way across the Atlantic and quickly aroused the admiration of an American clientele.

A reputation it owes in part to American Shape officers (Supreme Headquarters Allied Powers Europe), the supreme command of NATO forces in Europe, established near Versailles in the early 1950s. Coming to buy copper frying pans to cook steaks and omelettes, the officers left with black plate frying pans on the advice of a salesman who explained that the cooking would be much better for this type of food. Happy and convinced, they came back regularly and recommended the shop to their friends.

Two decades later, American cook and television host Julia Child introduced French cuisine to the other side of the Atlantic in books and shows that were watched by thousands of viewers. Trained in Paris, the priestess of French cooking was also a great admirer of the house of Dehillerin. Even today, many American tourists, influenced by Julia Child, visit the shop alongside their visits to the most emblematic monuments of the capital.

Rightly considered an Aladdin's cave, the house of Dehillerin has captured the essence of time, retaining the feeling through which is made its reputation: the quaint charm of a shop of yesteryear and the memory of unusual utensils. Who remembers chicken moulds, tin-plated moulds or "hâtelets", skewers topped by a figurine and used to decorate dishes and to give them a theme?

Regularly turned to for material during film shoots, the house appears in the credits of La Grande Bouffe and more recently in the series Chefs. It also maintains an excellent reputation abroad and is still regularly featured on US and even Japanese TV.

Far from being fixed in the past, the house of Dehillerin has adapted to the evolution of gastronomy and culinary techniques: its catalogue today includes all the essential utensils for modern cooking. It has never abandoned what has allowed it to distinguish itself from the competition from the very beginning: namely articles of exquisite quality and, in store, extremely professional advice.

The fourth generation of the Dehillerin family, in particular Éric and Édouard, sons of Jean and great-grandson of the founder, Eugene, now preside over the destiny of the house.